Welcome to the EMP Taskforce on National and Homeland Security

Help us with this fundraising effort. Click here to see our Go Fund Me Page. Don Davidson is organizing this fundraiser to benefit Electromagnetic Pulse Task Force On National and Homeland Security. Join us to make a difference.

The Task Force on National and Homeland Security is concerned about the vulnerability of our electrical grid and other critical infrastructures and the danger that it poses to our children and families. Our members include citizens, engineers, field experts, and others, all united in our concern for the American people. 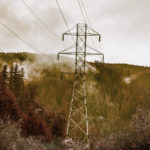 The threat of the U.S. power grid crashing is a very real but preventable problem but the average American has no idea of the severity of vulnerability under which we live.  Experts say our power grid can be destroyed and, when that happens, 70-90% of the U.S. population will die within the first year.  Experts also say it is not a mere possibility but a near certainty that the grid will be hit and it could happen at any time.  Six Congressional Blue Ribbon Commissions and several independent research organizations agree with those statements.  There are relatively inexpensive solutions to address the vulnerabilities of our electric grid and other critical infrastructures.  Our website seeks to educate the American people regarding what is facing us and what can be done. 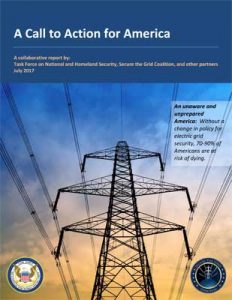 At the Task Force on National and Homeland Security, we believe the citizens and the local, state and national governments of the United States of America can come together to save lives by protecting our electric power and our critical infrastructures – including water & wastewater, communications, emergency services, transportation, healthcare & public health, food & agriculture, energy, banking & finance – against any and all threats, including cyber, physical attacks, extreme solar weather, and non-nuclear and nuclear electromagnetic pulse (EMP). Together, we can save lives and protect America by taking action at the personal, local, state and national levels.

WITHOUT ELECTRICITY, LIFE AS WE KNOW IT WILL END

We use electricity for almost every aspect of modern life. In our current state of unpreparedness, it is not a question of if, but WHEN, the grid collapses. When the U.S. grid collapses from a major incidence, there will be no food, water, sewage, gas, gasoline, medical services, or communications in large sections of the U.S. for years. If anyone in America doubts this, the Task Force on National and Homeland Security and other governmental and non-governmental organizations urge the American people to get the facts. Whatever you do, do not let the utilities industry decide for you.

Get the facts and then decide. Due to our modern-day dependence on electricity and the increasing delicacy of today’s electronics (i.e. microchips and microprocessors), our unhardened grid is woefully unprepared. Man-made threats to the electric grid include non-nuclear and nuclear electromagnetic pulse (EMP), kinetic (i.e. physical) attacks, and cyber-attacks. Natural threats include solar storms, severe weather, and other natural disaster events. Several of these threats to the grid have been continuing to increase in frequency and intensity in recent history. Of all the threats our nation faces, nuclear EMP can cause the widest and greatest damage to the electric grid. The U.S. also currently lacks spare parts and planning scenarios for grid down situations. Finally, the American people are unaware of the nation’s dire situation because they do not understand why previous grid failures will not reflect what the future holds if the U.S. electric grid continues in its current unhardened state.

Jaxon is a distinguished leader in Electromagnetic Pulse (EMP) hardening and survivability. Jaxon is a woman owned, small business dedicated to achieving survivability goals for the United States and our Allies. Jaxon designs, builds, tests and maintains EMP hardened structures for government and commercial clients around the world.

The National Disaster Resilience Council is a partnership between the FBI and the private sector. It is an association of persons who represent businesses, academic institutions, state and local law enforcement agencies, and other participants dedicated to sharing information and intelligence to prevent hostile acts against the U.S. The purpose of the National Disaster Resilience Council is to address and mitigate the threat of a simultaneous nationwide collapse of infrastructure from any hazard such as manmade or natural EMP.

The Secure the Grid Coalition

The Secure the Grid Coalition is an ad hoc group of policy, energy, and national security experts, legislators, and industry insiders who are dedicated to strengthening the resiliency of America’s electrical grid. The Coalition aims to raise awareness about the national and international threat of grid vulnerability, and encourage the steps needed to neutralize it. It operates under the direction of the Center for Security Policy.

The President of the Center for Security Policy is Mr. Frank Gaffney