“The world has lost a wonderful human being – our friend and associate, and I can honestly say my favorite “Rocket Scientist” (he’d chuckle I said that), Mr. Dwight Eckert. Dwight was an advocate and highly active in protecting the U.S. Electrical Power Grid against EMP (Electromagnetic Pulse) damage. He was the Colorado State Director of the EMP Taskforce on National and Homeland Security. I’d been to meetings with him at the State Capital, the Wyoming National Guard, and many other places. The first time I met him, Dwight was talking about the real-world effects of the loss of power on America – he couldn’t get the idea of people who were disabled or elderly living in a high-rise and not being able to leave due to a destroyed grid – out of his mind. He barely could get the words from his mouth as his eyes welled in tears, “there’s no one coming for them,” he said. Dwight cared deeply.

Dwight was a brilliant electrical engineer and knew a thing or two about Deep Space – in fact, he managed the entire Orion human-rated spacecraft Avionics Architecture for Lockheed-Martin. He even grabbed the tail of comet (Wild 2) and brought it back to earth. Dwight help launch the longest-running spacecraft in history and was proud it’s still orbiting today.

I thought of him just a week ago when the rare conjunction (800 yrs. rare) of Jupiter and Saturn occurred. I’d planned to call him, but, of course, my opportunity is gone forever. We last connected on August 2nd on the exciting splashdown of SpaceX with astronauts intact. At that time, he and his wife were heading to Tennessee to celebrate his sister’s life, who’d died alone due to the pandemic. Dwight loved his family and spoke of them often, including the little ones who liked being on his tractor! 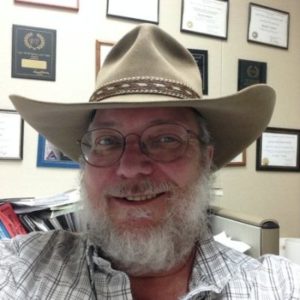 When I think of Dwight, I’ll think of his big smile & his big cowboy hat, which he loved to decorate at Christmastime by wearing his Santa hat on top. Come to think of it, he looked a little like Santa. I hope Dwight is being delighted and treated with the amazement and full discovery of the stars and galaxies far, far away.

We’ll miss you, Dwight, and so appreciate what you’ve done to make this world a better place. We celebrate you. May you rest in peace.

Our sincerest condolences to the family.”